Lessons From The Top 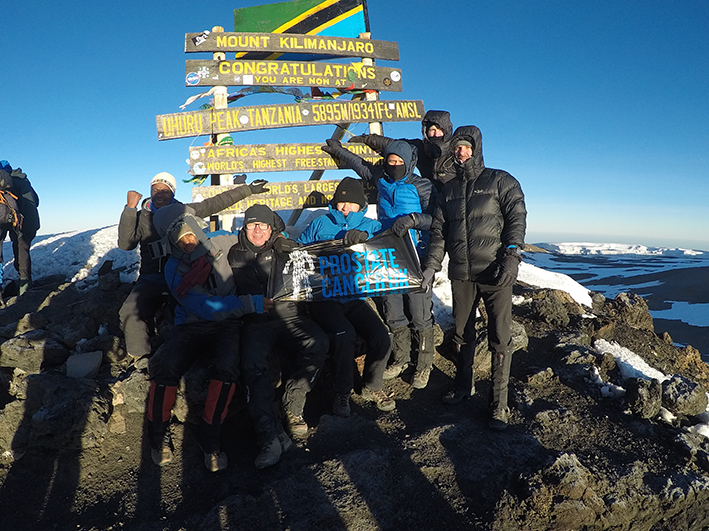 I was fortunate enough just a couple of months ago to set off with five friends to attempt to summit Mount Kilimanjaro in Africa. It was something I had been contemplating for many years and finally the time had come to stop the procrastinating and put a plan of action in place.

The planning was meticulous (or so I thought), the trip was expectedly eventful, and the lessons learnt were plentiful. Would I change anything about the whole trip? Yes of course. Would I have wanted to take on the challenge with all of the answers beforehand, absolutely not! The journey was as important as the end result and the lessons learnt before, during and after the event were a key part to the enjoyment of the whole adventure.

It occurred to me on the flight home, when sitting with a cold beer and with time to kill, that the journey I had just been on was very similar to the journey many clients will take when navigating a creative campaign. Something that Surefoot Communications have managed many hundreds of times in our nearly 20 years of business. 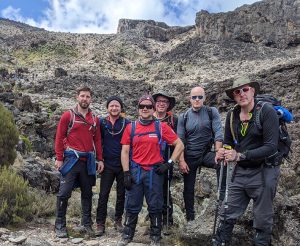 Let’s imagine for a moment that myself and my fellow climbers are the client. Trying something new and taking steps into a world outside of their comfort zone. Full of expectation and ideas, preparing ourselves for the journey but with little or no experience of what we were doing. We certainly didn’t want to appear daunted so a brave face and plenty of bravado was all it took to ease the worries of our family and friends. Underneath the bravado was a trepidation that was only shared amongst the climbers. We were confident that we would see it through but really had no idea what the journey entailed and what pitfalls we might face along the way.

It is fair to say that as a collective group we had educated ourselves on the terrain, taken guidance on what equipment was needed for the climb and watched more than a few YouTube videos of those that had already experienced the mountain. We certainly weren’t kidding ourselves that this would be a breeze, but we felt wholly prepared for what we were to face. Just point us up the mountain and we’re off? Not likely!

However prepared, there was one key ingredient missing for our journey planning. Our guides. Those guides were assigned to our group through our experienced expedition company. These are the guys that have been there before, numerous times, on many different routes, and faced most of the pitfalls that lay ahead on the journey. The trek would also require porters to carry equipment from one camp to the next and a cook to keep us fuelled during the duration of the climb. All essential parts of getting us to the summit.

Can you see where I’m going with this?

This was unchartered territory for us. We had been recommended our expedition company by a supplier contact to Surefoot. We had of course found plenty of other cheaper, bigger or specialised companies but, as is often the case, the recommended company was the safer bet.

From the moment we arrived in Africa it was clear these guys knew their stuff. They understood our lack of experience but were very happy to listen to our input rather than dictate to us. We were keen to get going, like six dads in a school skipping race, all eager to get started before the whistle sounds. An afternoon briefing and a walk through of the planned stages for the next seven days was enough for us to settle those ropes in readiness. It was made clear to us that this was very much a ‘one day at a time’ situation and not without the proper rest between days would we really stand much chance of ever reaching the summit. The key piece of advice given to us was ‘Poli-Poli’ which translates to ‘Slowly-Slowly’. It was made clear that getting ahead of ourselves was likely to cause issues further into the climb as we had to acclimatise to the conditions each day. A rush to the finish line was a recipe for disaster, and ultimately disappointment 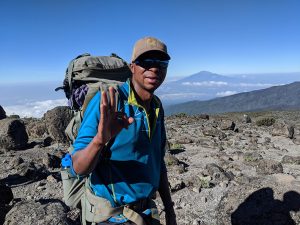 Language was of course an issue. We spoke in different tongues. The subtleties in both languages were present but often misunderstood. Our guides remained constantly cheerful whilst offering very pragmatic advice. Questions were encouraged and answered rather than receiving a pre-written plan. Individual concerns were dealt with and managed during regular daily meetings and our guides were on hand at any stage of the day to answer those questions that arose from the immediate surroundings. ‘Real time’ advice was always available, and lessons learnt as the days progressed.

The experience of the guides was immeasurable. Our main guide Nico had previously climbed Kilimanjaro 178 times. He had trekked with climbers of all levels of experience and interestingly had said it was almost impossible to predict who would reach the summit. This was not a race of the fittest but of resilience, mental attitude and no shortage of hard work.

Acclimatisation during the early part of the climb had set us up well. We were buoyant and confident, feeding on encouragement from our guide team. We were progressing as expected, the weather had been kind to us and the group was in high spirits. Day three offered a new challenge, The Baranco Wall. This steep vertical ascent was going to be the most difficult test of the climb, especially for the less experienced of the team. This required us all to learn new skills, and quickly. Negotiating some dangerous ledges and boulders, it became a matter of teamwork to get us through. Learn and pass on. Negotiate and teach. The views at the top of the wall were the most spectacular we had yet experienced. The climb seeming worth every ounce of energy it had taken to get us there. 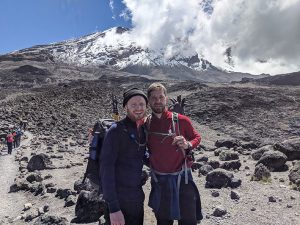 Throughout the climb there was certainly no lack of humour. Six very good friends with a joint focus added a light-heartedness to the whole situation. Washing routines, sharing tents with snorers, playing cards by torchlight and even porters in loafers. Those memories will stick with me forever.

The food we received on the mountain was plentiful, if sometimes seemingly bland. Our diet consisted mainly of carbohydrates. Food that was able to sustain us over the long days rather than just offer short term benefit. Chilli sauce and ketchup became our best friends! It was clear that what we received was more a matter of what we needed, rather than what we wanted. Our cook, a man of experience with over 1000 previous climbers catered for, knew exactly what it would take to fuel us to the summit! As the days progressed the potato soup became chips, the rice became risotto and the eggs became omelettes.

It is certainly fair to say that summit night was the toughest yet. The long days didn’t bother any of us, but the lack of sleep was taking its toll. Our tents were inevitably on sloped ground, ensuring a slow slide towards the tent door on most nights. The views were spectacular, affording us clear skies and a view of the summit but the last leg was always going to be the hardest. This is where Nico and the team came into their own. The final night was brutal, with a midnight start and a sunrise deadline to hit the mountain summit. The end was in sight, but the dark of the night made it impossible to gauge how far we had left to go. Head down, drawing on reserves that we didn’t know we had, we followed the feet of the man in front. This was our guide team’s time to shine. 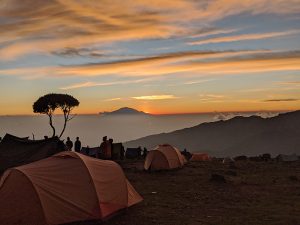 A seven-hour ascent to Stella Peak was interrupted by short 2 minute breaks, ensuring we kept momentum in minus 20 degree temperatures. The sun was rising, and we were less than an hour from the summit. Emotions were running high, both with a level of expectation and relief. The last leg was to be a march of triumph and we reached the summit shortly after sunrise. A short break for congratulatory photos and high fives was afforded at the peak. This was what months of planning and hard work was all for. There was a feeling of ultimate achievement amongst us, knowing this was something we would all look back upon with great pride. I don’t mind telling you that a couple of tears were shed amongst the group. Walking in aid of Prostate Cancer (£8000 raised) and in memory of recently bereaved family had also given us a sense of perspective amidst the personal landmarks. 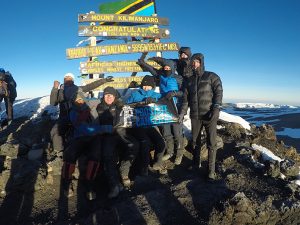 But there was still work to do. The trek wasn’t complete at the top and Nico was keen to use the euphoria of the summit to move us on again. The descent to normality passed quickly and a renewed energy was found by the group. The reduction in altitude on the way back down to basecamp, and the chance to breathe normally again, was very welcome.

Arriving back at Moshi Gate on day seven gave us time to reflect on our achievement. The pictures would serve to remind us of the trek in years to come but the experience was what we had come for. Job done.

So, did you see it? The planning, the journey, the guides and ultimately the achievement.

At Surefoot we live for the journey. Passion for our job is why we come to work and helping our clients reach their own individual summits gives us those high five moments. If you have a summit to climb, or even a smaller practice peak, and would value the knowledge and experience of a decent guide team then we’re booted up and ready!

You can find out more about which cookies we are using or switch them off in settings.

This website uses cookies so that we can provide you with the best user experience possible. Cookie information is stored in your browser and performs functions such as recognising you when you return to our website and helping our team to understand which sections of the website you find most interesting and useful.

Strictly Necessary Cookie should be enabled at all times so that we can save your preferences for cookie settings.

If you disable this cookie, we will not be able to save your preferences. This means that every time you visit this website you will need to enable or disable cookies again.